At the moment Sarah is in the prosess of producing the shrouds for the “jekt Anna Karoline” in Bodø. The shrouds are 47 mm in diameter and are made of tarred hemp. Some of the shrouds are older, and was made for another jekt, Brødrene, but they were never used. The rest of them have been produced by Sarah and her co workers from Hardanger Fartøyvernsenter. They they have already the deadeyes seized in. Sarah is now working on shortening in the older shrouds to fit Anna Karoline, and here are some pictures from the job of seizing in the deadeyes. 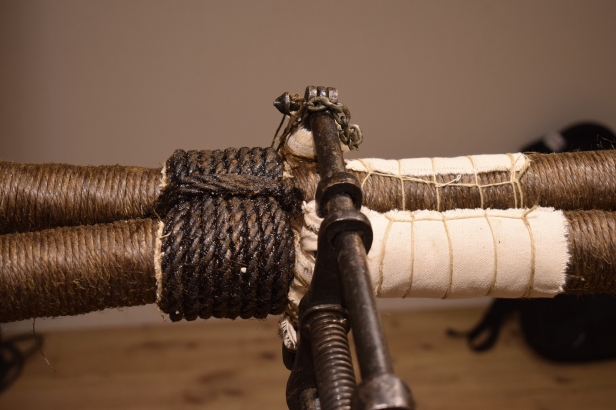 Here is a picture from making the eye over the mast, but the same is done when seizing in the deadeyes. On the outer part of the shroud a double layer of canvas is fastened with twine where the seizing comes. This is done to prevent the 8 mm line to be squeezed  into the serving. 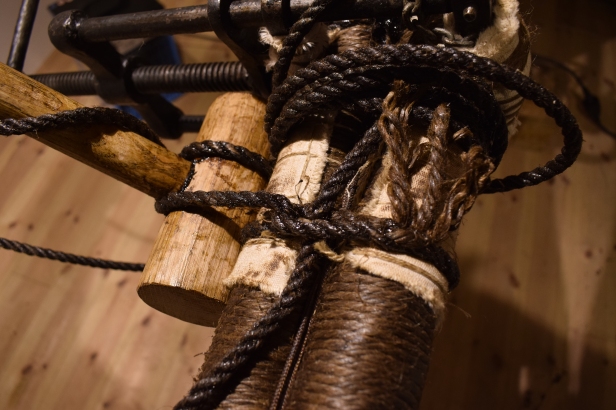 When starting the seizing a spliced eye is made on the line. The eye is just big enough to get two parts of the line through it. The strands of the line is spliced with one, two and three times through the line. Then all the strands end up on the same side as you see in the picture. The picture also show that the line has been pulled through the eye, and layed around the shroud eight times before the end goes under all the layers and back through the eye again. Then the seizing is ready to be tightened with a heaving mallet. 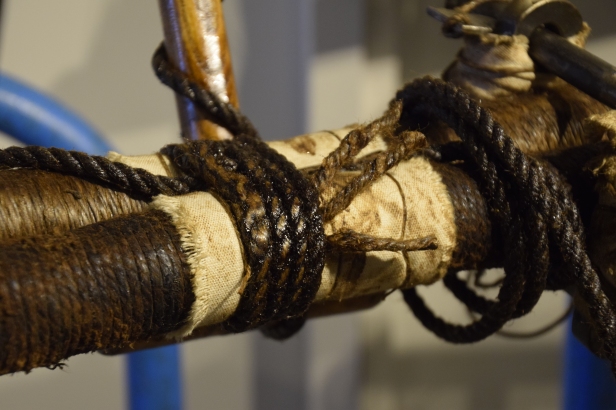 The line goes several times around the parts and on top of the strands before they are cut off. 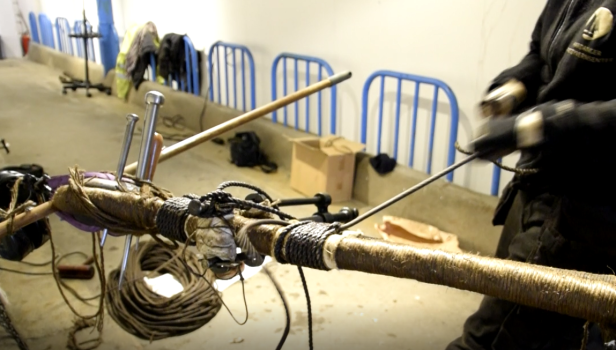 When all the turns are tightened we pull the end of the line tight. First by hand…. 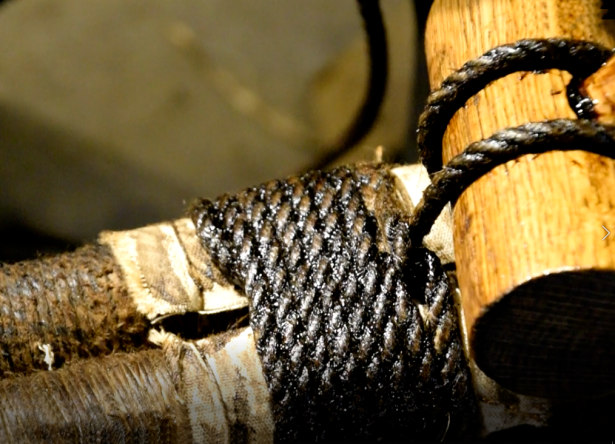 …and then with the heaving mallet. 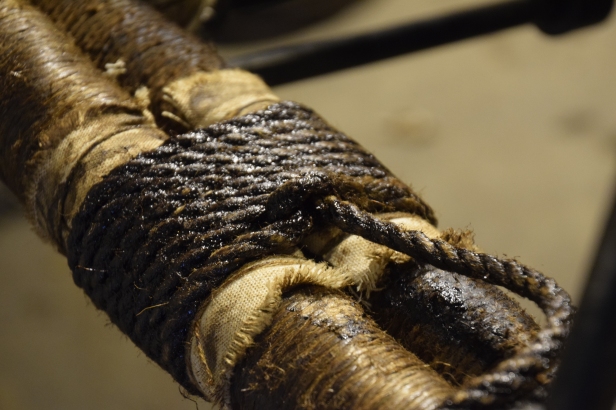 The first layer of the seizing is done, and as we see the end comes out through the spliced eye. 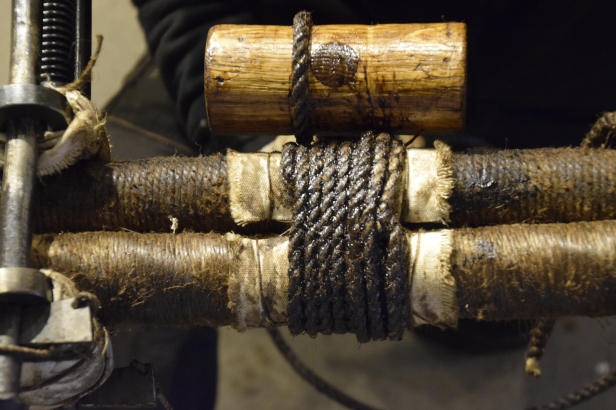 Layer number two is well on the way, and the line ends up in the grooves in the first layer. As we had eight turns in  the first layer there are now seven turns in the second layer. 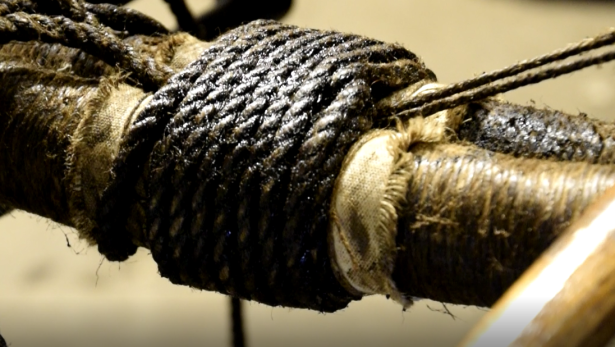 When the second layer is done we have to get the end of the line underneath both layers. That is only possible in the groove, and we use a thine line to pull the end through. As this is done it is good that the canvas is only layed on the outer sides of the two parts. 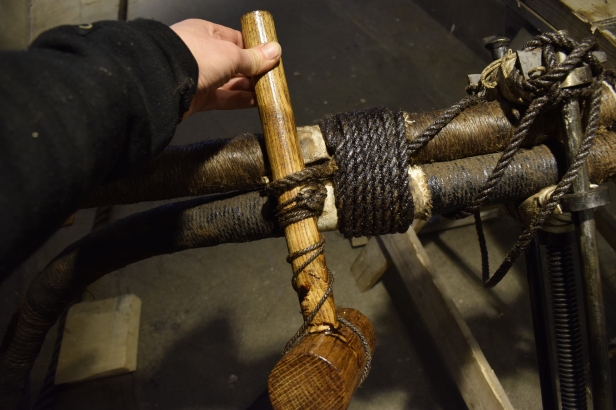 To pull the line underneath we use the heaving mallet by twisting the thin line around the head and handle. Then we hold onto the head and turn it. Thereafter the line is pulled through and tightened with the mallet again. The line is now locked as it get wedged between the seizing and the part og shroud when tightened. At this stage Sarah found her knife and cut away the canvas that sticks out from underneath the seizing. 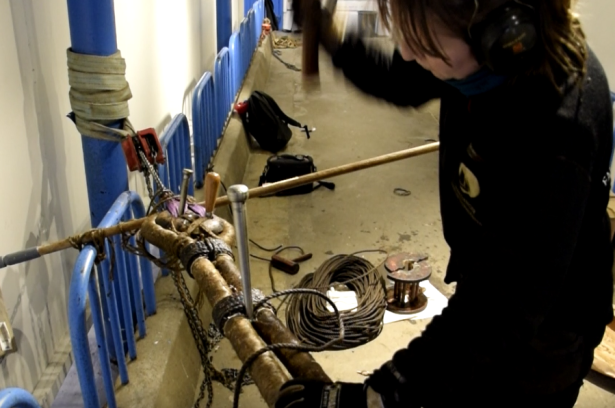 When seizing in a deadeye or round thimble we do finish the seizing with cross turns. To get the line between the two parts close to the seizing we have to force a marlinspike through the groove to make a pilot hole. 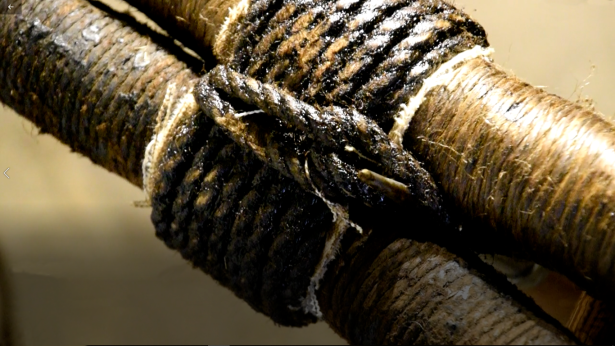 As the line comes through we have to lift the first crossturn we made with a marlinspike. As soon as we take the spike out the end of the line is pushed through from the middle and out. Then it goes between the parts again to be tightened with the mallet from the other side. 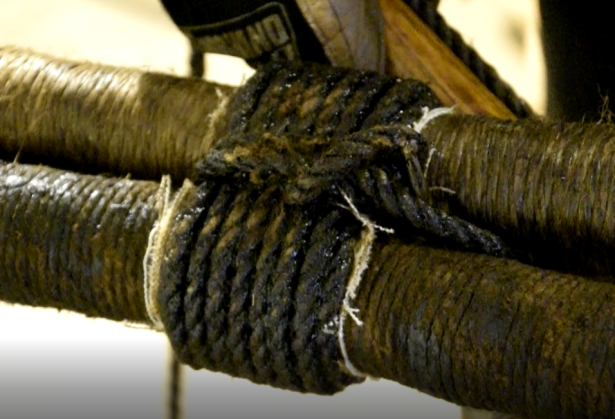 When the is tightened we send it back to the the “knot side” and make a turn around the other crossturn, but now from the outside to the middle. This turn is also tightened, and the seizing is all done. We can cut the line. 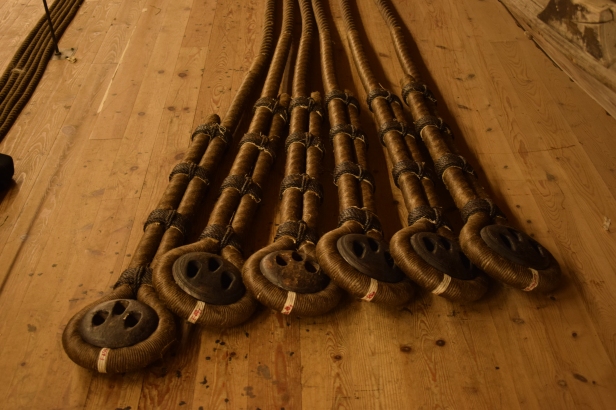 Some of the shrouds with their deadeyes seized in. Altogether Sarah has to make more than fifty seizings to get the standing rigging done. At this stage she has sore and tired hands and arms. Poor thing.