With the covering board I think of the very outermost plank in the deck. On a lot of the older Norwegian vessels this plank was filling the room between the stanchions and laying on top of the sheer strake. A plank to cover the top of the frames so to speak.

The illustration shows how the covering board is laying on top of the upper plank in the hull and are laying like a lid to protect the top of the frame.

Last month Kamilla and Paul made the covering board for Anna Karoline, and here are some pictures to show the prosess.

Kamilla is placing a plank on the outside of the stanchions to mark it to fit between the stanchions and rest against the waterboard inside og the stanchions. In each end of the raw plank she has set a screw or a nail so that the plank is hanging in the chains. Since she is using chains with small links it is easy to adjust the plank to be level. 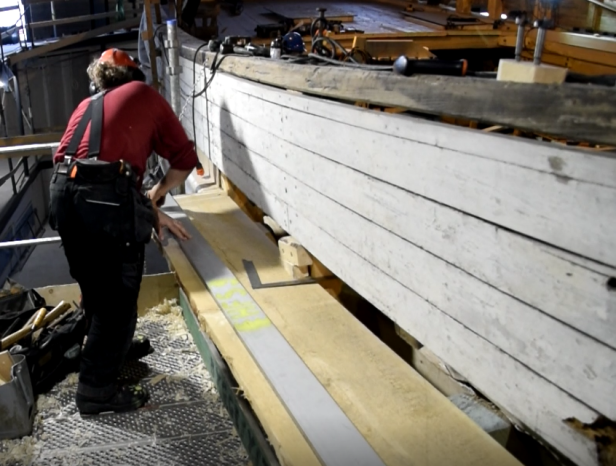 Step 2 is to mark a straight line from end to end. Paul and Kamilla always drew a line using the straightedge that was placed as close to 90 degrees as possible to all of the stanchions’ sides. Sometimes it is handy to nail down that straightedge as it is then  very easy to hold the square into the straightedge. We’ll see how that is used soon. The square is placed so that one arm touches the side of the stanchion and the other arm follows the line or the straightedge.

Here we see that the straightedge is touching the inside of the stanchion and is approximately 1 centimeter away from the stanchion on the outside. That means we have to do the same at the fixed distance we choose to use. See below.

With a ruler or a fixed distance (here shown with a board) Paul is marking the covering board so that it will fit exactly its place. The only thing that is important is to get the same distance in the same direction. In the bow you cannot just mark parallell to the waterboard like here, but you have to follow the direction of the square when it is laying like shown earlier.

Here are the lines for the stanchions drawn on the wood and it is important to mark correctly.When the square is laying in position following the reference line and touching the stanchion on one corner, while there is a gap on the other corner, we have to mark it like that on this plank. Touching on the outside corner anda few millimeters off the square on the inside corner. Thereafter we draw a line between these two marks.

Where the stanchion is placed we have to cut away more wood than anywhere else, and it is important to make a line that follows the stanchion. When we use a saw to follow the line we place the saw so that it cuts half the line at the bottom of this line and on the outside of the line on top of the covering board. Then we have the right opening for the caulking right away. Tight in the bottom and a few millimeters opening on the top. 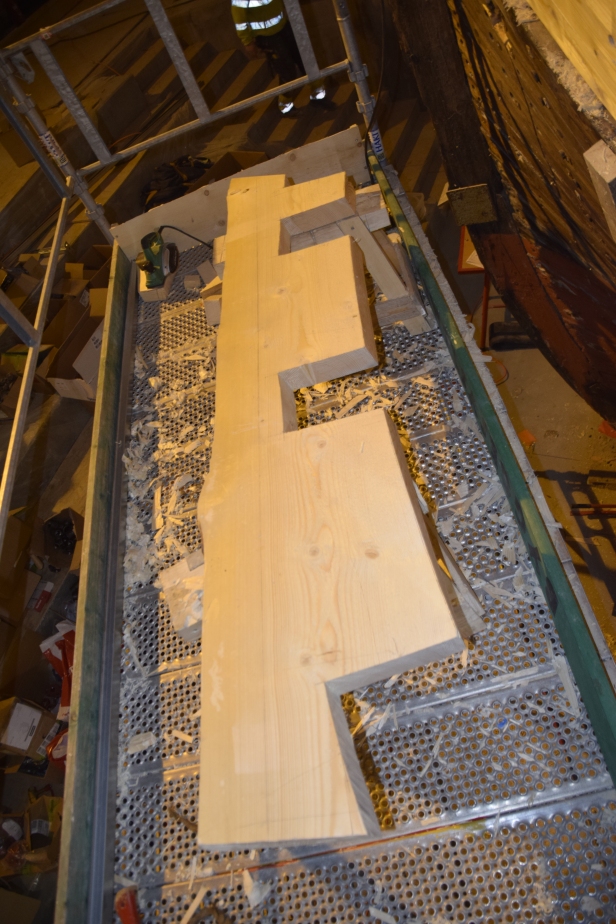 Here Kamilla have cut away wood following the lines.

The covering board is butted on a stanchion. We do this in a slight angle so that it is easy to slide the piece we ar working on in place and the more we push it in place the tighter the butt gets. 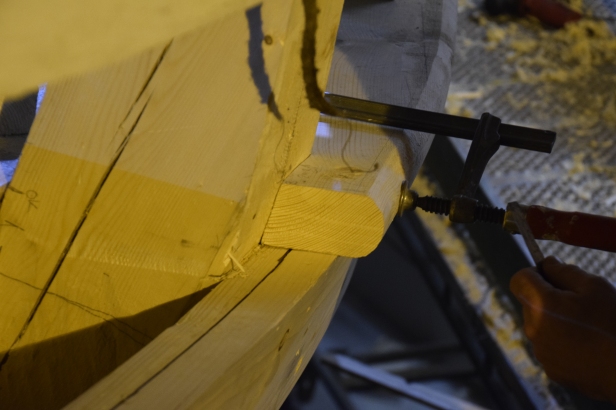 When we are happy about the fit we cut the covering board  so that it hangs out over the upper plank of the hull, and make a nice curve on the outside of it.

Before bolting it into place Paul is touching up the surface with a hand planer.

Time to bolt it into place. Two bolts between every pair of stanchions and a nail into the stanchion.

The covering board on port side is done. It makes a nice curve and shows the springline of the deck.

One thought on “Fitting the covering board on Anna Karoline”